Strategic (or tactical) voting, often a hot topic among voters and pundits during close election campaigns, is also a fertile topic in political science literature.  The three candidate race in the 2014 Toronto Mayoral contest was seemingly an ideal context for strategic voting to occur.  The candidate polling in second place (Doug Ford), was highly polarizing, and there was much discussion in the media about how Chow supporters might abandon her in favour of Tory, in order to prevent a Ford victory. Perhaps surprisingly, Toronto Election Study (TES) data reveal that rates of strategic voting were relatively low in this election, and such behaviour did not have a decisive impact upon the election outcome.  We suggest that the low rate of strategic voting is largely due to the fact that Chow supporters had unrealistic expectations about her chances of victory.

Strategic voting has been studied extensively at the federal and provincial levels in Canada and elsewhere.  One setting in which strategic voting has gone more or less unconsidered, however, is municipal elections, specifically those not contested by parties.  This is despite the large number of municipalities in Canada, the United States, and elsewhere in which political parties do not officially participate in elections. One might expect rates of strategic voting to be different in a setting where voters are not weighed down by the anchors of party loyalty and the knowledge of previous contests between parties.

The 2014 Toronto mayoral election furnishes an excellent opportunity to study this phenomenon. The performance of Toronto’s controversial and deeply-polarizing incumbent mayor, Rob Ford, may have prompted anti-Ford voters to consider carefully the prospect of voting strategically for the candidate that has the best chance of defeat his brother, Doug.

In this post, we calculate the rate of strategic voting in the 2014 Toronto mayoral contest. In line with the classic approach to identifying strategic voters, we use what Blais et al. (2005) refer to as the “direct” method of measurement, which employs measures of candidate rankings, perceived competitiveness, and vote choice. Voters are categorized as strategic if they meet two criteria. First, their most preferred candidate must be seen as least competitive of the three major candidates. Second, these individuals must vote for their second preferred candidate.

We then consider whether the rate of strategic voting was sufficient to overcome John Tory’s margin of victory. Tory won 40.3% of the popular vote, Doug Ford received the support of 33.7% of voters, while Olivia Chow came in third, with 23.2% support. Tory’s margin of victory was therefore 6.6%, meaning that at least that much strategic voting must have occurred in order for it to have impacted the outcome of the election.

Most polls in the days and weeks leading up to election showed Tory and Ford as the clear front-runners, and much of the discussion in the media was about how Chow supporters might abandon her in favour of Tory, to prevent a Ford victory.  TES data suggest that this discussion may have been warranted. In the pre-election wave of the TES, respondents were asked to estimate the chances of each candidate winning the election, as well as to rate each candidate (both on a scale from 0 to 100).  The following figure shows the average values for responses to these questions for each candidate, among voters.

Candidate Ratings and Evaluations of Competitiveness 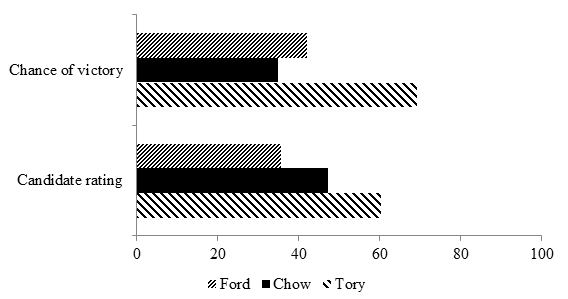 On the whole, voters saw Chow as the least competitive of the three major candidates, giving her a 34.8% chance of winning the election. Tory was seen as the most competitive, with a 69.1% chance of victory, while Ford was in the middle, at 42.1%. Not surprisingly, the candidate seen as most competitive also received the highest rating from voters; Tory had an average rating of 60.4. However, though Chow was seen as the least likely to win the election, she did not receive the lowest rating (47.2). This distinction belongs to Ford, who received a an average score of only 35.5. TES data therefore confirm media speculation that this election was a case where one might expect to see strategic voting, particularly among Chow supporters. Though Chow was the second most popular, she was also seen as the least competitive. If voters did indeed see Tory as the best option for defeating Ford, Chow supporters might reasonably have decided to opt to support him, instead of their most preferred candidate.

Despite the fact that this election seems ripe for strategic voting, the estimated rate of such behaviour, according to the procedure outlined above, is a mere 1.3%.  This value is considerably lower than estimates calculated for federal and provincial elections (according to Blais (2002, 445), rates of strategic voting in such settings are “typically around 5 percent”). Nonetheless, John Tory was, as expected, the largest beneficiary of strategic voting, receiving 81.1% of such votes. Ford and Chow received some support from strategic voters, but captured only 15.9% and 3.2% of strategic votes, respectively.

The 1.3% of ballots cast strategically were obviously not enough to overcome Tory’s 6.6 point margin of victory. Strategic voting therefore did not have an effect upon the outcome of the election.

So why was strategic voting so uncommon? The reason appears to stem from the fact that many survey respondents had a poor understanding of how competitive their most preferred candidates were.  A mere 5.2% of voters saw their preferred candidate as the least competitive. Blais (2002) has identified a misunderstanding of competitive circumstances as an important reason why rates of strategic voting are not higher in national elections, and we find the same pattern in Toronto 2014. The following table shows how competitive each candidate was perceived to be by those voters who ranked them as first, second or third preferences.

These data provide compelling evidence that candidate preference was strongly related to perceived competitiveness. While Chow supporters did not see her as having the best chance of winning, on average, they did believe that she was more likely to win than Ford (despite the fact that polls had indicated as much for the last several months of the election campaign). Similarly, Ford supporters believed that he was the most competitive of the three candidates. Voters cannot be expected to abandon their first preference for strategic reasons if they do not believe that candidate is uncompetitive, and the failure of Chow supporters to recognize this, in particular, seems to have contributed to a very low rate of strategic voting in the 2014 Toronto mayoral election.