To reverse turnout decline in advanced democracies, governments have experimented with various voting reforms. Making voting easier is often seen as one way to increase participation. Motivated by hopes of increased participation, governments around the world began adopting online voting. Currently, internet voting is used in ten countries: Australia, Armenia, France, India, Mexico, Panama, the United States, Estonia, Switzerland and Canada. Yet, nearly twenty years after initial experimentation, its effect on voter turnout remains unclear. Evaluating the effects of online voting on turnout has proven challenging given that it has been used in one-off pilots or enacted in combination with other voting methods.

In a recent article published in the British Journal of Political Science, we examine whether internet voting affects turnout using Ontario municipal elections. Since 2003, 98 Ontario municipalities have adopted internet voting for at least one election (see map below for an overview). There was widespread variation in how these electoral changes were adopted. In some places, pre-registration is required if voters want to vote online. There was also variation in the time different voting option were offered: sometimes online voting was offered in advance polls only, while in other cases it was available for the full election. In addition, in most municipalities that adopted internet voting, paper ballots were also eliminated. Finally, in some cases online voting replaced postal voting, another remote, convenience voting method. Differences in how internet voting was adopted over time and across municipalities provide helpful variation to evaluate online voting’s effect on voter participation. 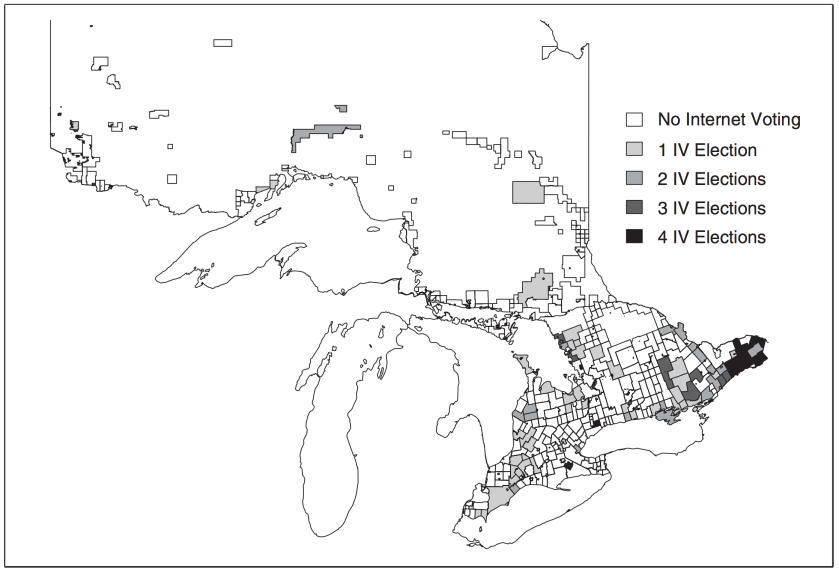 We used original longitudinal data covering on local elections in Ontario over five election periods, from 2000 to 2014. Variables collected for each election included voter turnout, internet voting status and the competitiveness of the mayor’s race. Our results show that internet voting can increase turnout by 3.5 percentage points. This effect is twice as large when postal voting was not adopted beforehand, suggesting that these different ways of offering greater convenience for voters are often substitutes – though of the two, online voting has a greater impact on participation. In terms of internet voting rules, more people vote online when registration is not required and uptake still increases when paper voting is eliminated. These results suggest that how internet voting is implemented matters.

Overall, our study shows internet voting increases turnout but suggests that it is unlikely to solve the low turnout crisis. As a relatively small change to voting rules, online voting could deliver bigger pay-offs for turnout. For local governments, while online voting is not the hoped for silver bullet to counter turnout decline, it may be a good choice for voting reform if increased participation is the goal. Finally, administrators should carefully consider the specific rules of online voting implementation to maximize its potential to increase turnout.

Leah Stokes is an Assistant Professor of Political Science at the University of California, Santa Barbara